The Dayak Events mostly made upon celebrating harvest or medical treatment for those who are influanced by magic. Cause of the ad-hoc schedule we can only present common events in our web page. For upcomming events, please feel free to contact us.

At a Erau Ceremony, all citizens come from all corners of Kalimantan with the provision of food, livestock, fruits, and also the artists. Erau Paray is a ceremonial feast of the Kutai Kingdom. It starts with the worship of the ancestors and the offering of thanks. Many Dayak Tribes will show here their kind of culture and ceremony style. 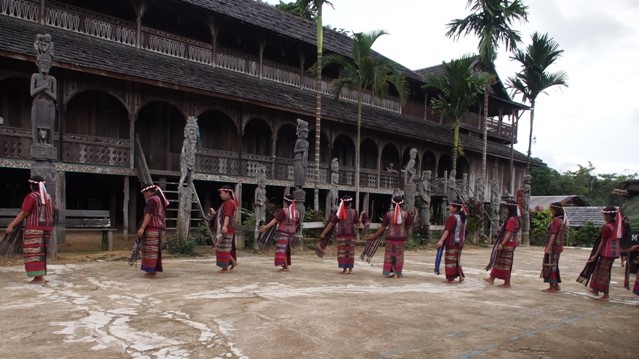 History
The Dayaks tribes came to Kalimantan as a migration from other parts in Asia about 3000 years ago.
Dayak are defined in more then 200 different tribes, the main tribes are the Bakumpai and Dayak Bukit of South Kalimantan; the Ngajus and Baritos of Central Kalimantan; the Benuaqs, Kayan, Kenyah, and the nomadic Punan of East Kalimantan, and the Ibans of West Kalimantan and Malaysian Borneo.
Traditionally, Dayak agriculture was based on swidden hill rice cultivation called "ladang" and "hutan. Dayaks organize their labor in terms of holding groups which determined who owned rights to land and how it was to be used. Nowadays, the Dayaks work in the mining industry, wood industry, and on the plantations of Kalimantan.

Religion
The Dayak indigenous religion is a form of animism called "Kaharingan", and seems to be close with Hinduism. The practice of Kaharingan religion differs from tribe to tribe. The spirit is believed to partake in the celebration, a mark of honor and respect to past ancestries and blessings for a prosperous future.
Since 1970 missionaris came in to Kalimantan and most Dayaks converted to Christianity which was introduced by European and American missionaries. The relations between all religious groups are generally good. Despite the destruction of pagan religions in Europe by Christians, most of the people who try to conserve the Dayak's religion are missionaries.
In the Coastal cities the populations are largely Muslim, influanced by the relatively high cultural Javanese Majapahit Kingdoms and the Islamic Malay Sultanates that appeared periodically throughout Southeast Asian history.

Society
The Dayaks live in longhouses, which is a structure of hardwood posts that can be hundreds of meters long, mostly located along a river bank. At one side there is a long communal platform, the other side (back side) has the individual households apartments for each family.
Headhunting kept the practice of old headhunts alive and was an important part of Dayak culture. The Dayak wars In the past Reports captured enemy heads, there have been massive coordinated raids in the interior, and throughout coastal Kalimantan.

Mandau (machetes) is a a narrow strip of a harder iron wedged into a slot in the cutting edge for sharpness. Headhunting necessitated being able to draw the machete quickly. The mandau is short, and nowadays used for trail cutting in the forest. It is holstered with the cutting edge facing upwards and at that side there is an upward protrusion on the handle, so it can be drawn very quickly with the side of the hand without having to reach over and grasp the handle first. The hand can then grasp the handle while it is being drawn. The combination of these three factors (short, cutting edge up and protrusion) makes for an extremely fast drawing action. The ceremonial mandaus used for dances are as beautifully adorned with feathers as the dresses are.